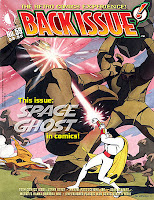 It's PSN time again, kiddies! The new BACK ISSUE! spotlights comic book adaptations of cartoon characters and cartoon adaptations of comic book characters from the '60s (yay!) thru the '80s (boo!). I have a special fondness for the Hanna-Barbera superheroes of the 1960s, the Herculoids, Shazzan!, Frankenstein Jr. (and the Impossibles!), and especially the über-sleek Space Ghost (about whom I rhapsodized in GEEK Magazine in 2008).

Sadly, Space Ghost's comic book legacy is short and spotty (see the linked article above for more). The last incarnation, a seriously grim adaptation by writer Joe Kelly and artist Ariel Olivetti was about as ill-advised as a murderous Captain Marvel or a gun-toting Alfred. There remains a lot of untapped potential in the character. Maybe someday.

In the meantime, I speculated as to what might have happened had the H-B TV Heroes been fully integrated into the Marvel Universe of the Silver and Bronze eras, mocking up comic covers, panels, ads and merchandise. This installment is not quite as inside as the Implosion Happy Hour episode, but it's still not going to make sense to the less-geeky of you. That is, I'm afraid, the fun of doing this comic strip.

Here's the strip as it appears in BACK ISSUE!, followed by the individual elements for a closer look. 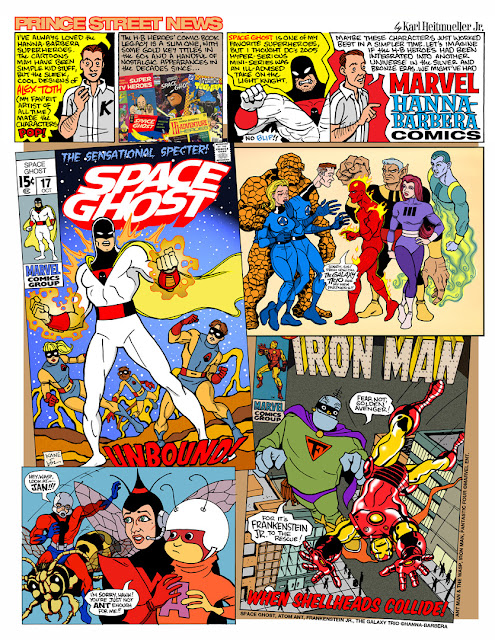 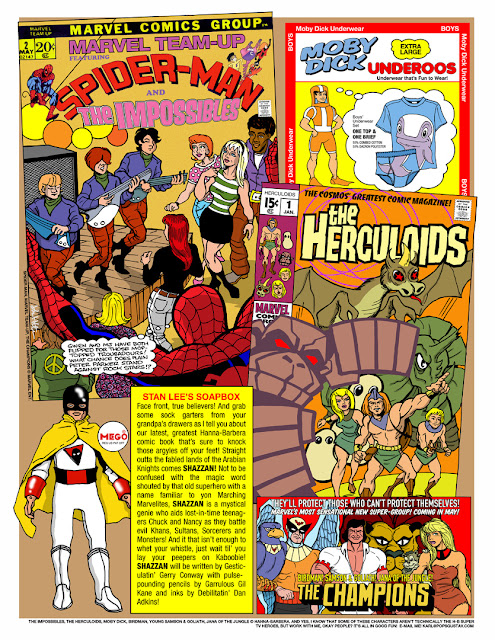 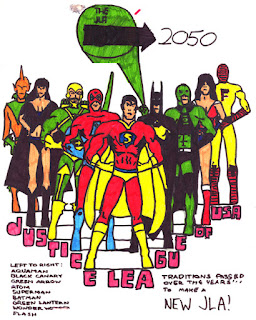 It's time for another re-interpretation of a childhood superhero drawing (the last one of my weird Batman redesign from my youth got a fair amount of play on the Internet, thanks!). This time around, I tackled a futuristic reboot of DC Comics' superhero team, The Justice League of America. I'm not sure exactly how old I was when I did this drawing, but I'm guessing it was probably sometime around 6th Grade, making me 12-ish.

Some of these costume designs are a little... bizarre, especially coming from an adolescent perspective. Both Wonder Woman and the Black Canary have exposed belly buttons, which I guess is fine. But Green Lantern, Green Arrow and Batman seem to be wearing some kind of fetishistic bondage outfits, with lots of high boots, halters and straps. Do not ask me what I was thinking at the time, but in the new piece I felt I had to embrace the freakiness of the designs by indicating that Batman's high boots and gloves are made out of some kind of vinyl-like substance. Or vinyl. Batman's wearing vinyl.

I actually kinda like the Flash design here, with just a bunch of blurring lines on his face and extremities (presumably all of them). The Atom isn't that far off from his comic book costume in the 1970s. The Superman (complete with low-waisted yellow speedos) is yet another example of how you just can't mess with the perfection of the character's iconic design. And I don't know what the deal is with that Aquaman.

I think my favorite thing in the entire original drawing is how Wonder Woman's hair completely covers her eyes, like a cool 70s hippie chick (I wish I could see a Jeff Jones or Mike Sekowsky version of this costume).

In the original drawing (clipped to save space), the "2050" is out of the green circle because when I originally dated the futuristic version of the team (with its "traditions passed over the years"), I wrote the year, "1092." Apparently, I quickly realized that 1092 was indeed the past, and not the future, hence the clumsy alteration. Ah, if only I'd have had Photoshop back then.

(Note: the cover template is loosely based on the cover of DC SPECIAL BLUE RIBBON DIGEST #11 from July 1981.) 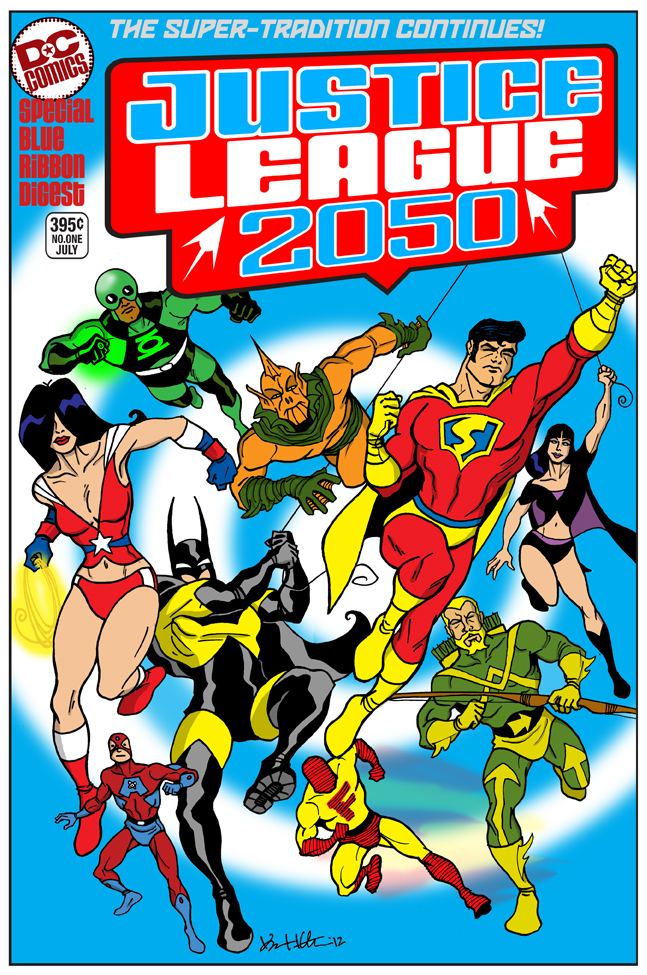