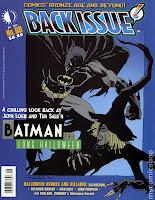 The new BACK ISSUE! is a Halloween Heroes and Villains issue, so I plopped a bunch of horror-themed comic book characters into an iconic pumpkin patch from another much beloved comic strip. Again, I'm sure most of these gags are going to skitter right over the heads of those of you who don't have a preference in comic bag mil (I'm a 3 mil man, myself), but at least this one's kinda pretty to look at.

I'm not going to explain every joke, but I will tell you who the cast of characters are, in order of appearance: Man-Thing, Satana, Spooky the Tuff Little Ghost, the Demon, the Spectre, Ghost Rider, Jack O'Lantern, Werewolf by Night, Deadman, the Son of Satan (imagine a major comic book company trying to release a book today where the hero was called the Son of Satan... God, I love the '70s), Vampirella, the Grim Ghost, Swamp Thing, the Zombie, Morbius the Living Vampire, Gene Simmons aka the Demon (MARVEL SUPER SPECIAL #1 starring KISS had the band members' blood mixed in with the red ink, hence the vampire commenting on the taste of the publication), Man-Bat, Brother Voodoo, Dell Comics' superheroic versions of Frankenstein and Dracula (I omitted the nearly as ludicrous Werewolf), Marvel's versions of said characters in the background, Dick Briefer's comedic take on Frankenstein from the 1940s, Marvel's Scarecrow (oh, and that's Batman chasing him, in case you didn't know), and finally the Great Pumpkin.... er, Snoopy (and good ol' Charlie Brown).

The background of this strip was done in homage to the great backgrounds of IT'S THE GREAT PUMPKIN, CHARLIE BROWN. I used a ton of markers, overlaying colors on bleeding newsprint to approximate the water colored backgrounds of that cartoon. Why didn't I just use watercolors, you ask? I tried! I suck at anything involving a brush! 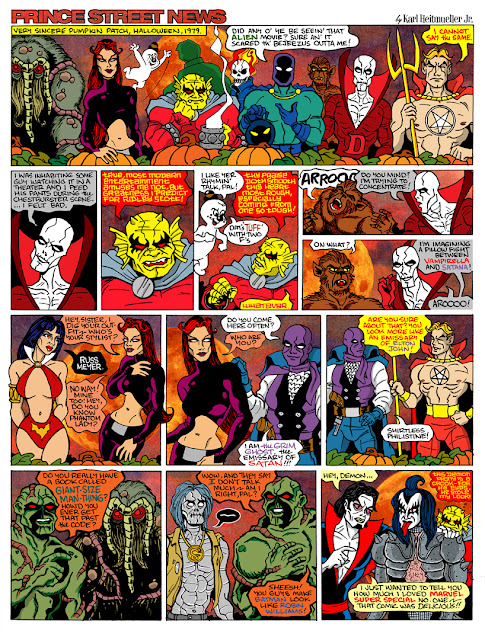 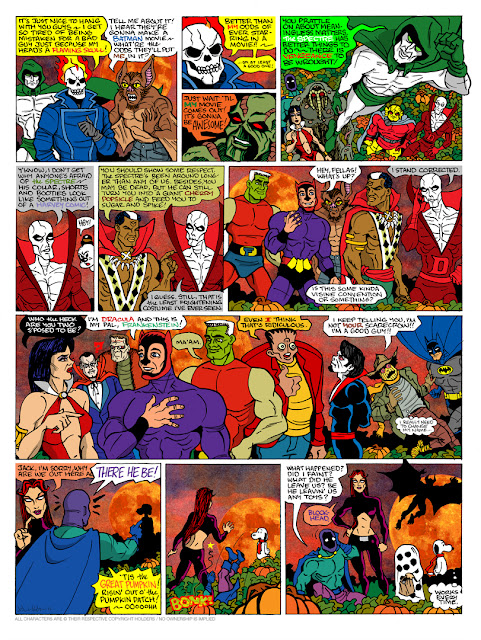